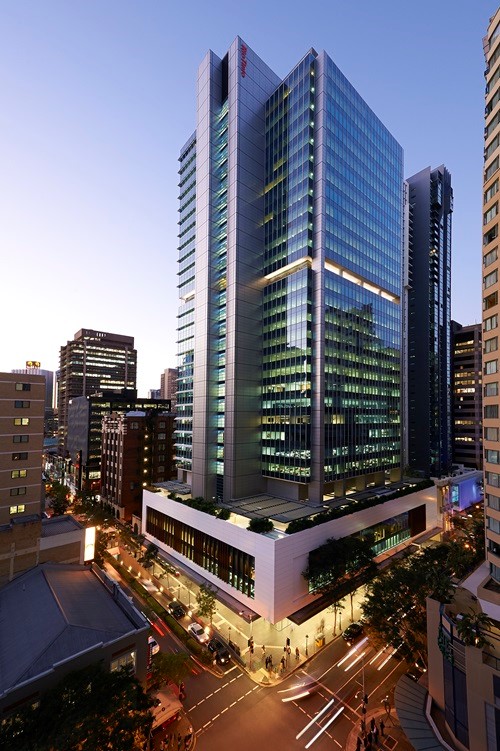 Cladding buildings with a product of the same heat potential during combustion as petrol, is an extraordinary situation for the construction industry to arrive at. The reactions to and ramifications following building fires over a 15-year period, culminating in the Grenfell fire of 2017 with 72 deaths, are now coursing through the Australian building industry.

Aluminium Composite panels (ACP) with 100% Polyethylene (PE) core were originally developed in the 1980s for the signage industry. The building industry identified the benefits of very high-quality coil coated finish, ease of fabrication into stiffened cassettes with exceptional flatness and improved thermal performance as an alternative to solid aluminium cladding.

Following concerns raised around the flammability associated with the 100% PE,  Mitsubishi developed  Alpolic fr,  which incorporated a fire-retardant mineral core with the intent to be ‘fit for purpose’ as non-combustible cladding, as required by the BCA. The core of these products had less than 30% Polyethylene (PE), compared to 100% Polyethylene (PE) as used at Lacrosse Tower in Melbourne and Grenfell.

The BCA in Amdt 3 of July 1998 did introduce specific provisions for ACP cladding which still included testing against AS 1530.3, as well as non-combustibility testing against AS 1530.1. The continued use of 100% PE panel since this Amendment in 1998 has been against the intent of the BCA. The combustibility problem likely initiated due to there being no appropriate Australian Standard testing regime to properly assess ACP, as part of a cladding system. The standard AS1530.1 test for non-combustibility required by the BCA, subjects material to 770°C, which is higher than aluminium’s melting point and it is unlikely that any ACP products at the time would pass that test. A further problem with the prescribed test of AS 1503.1 is that it is a component only test. The standard specifically excludes its applicability to laminates such as ACP. This led to appraisal and certification being based on ACP cladding deemed an “attachment” with the lesser AS1530.3 test requirement which was readily satisfied by 100% PE core products. AS1530.3 was developed to test ignitability of wall linings with the surface exposed to a heat source. It was never an adequate test of combustibility, as the ensuing disasters have proved.

Following various national and State investigations the BCA (NCC 2016) was amended (Amdt 1 – March 2018) ) with a multi-facetted approach to improved fire safety. This included the introduction of the CV3 Verification path, which refers to AS5113:2016, testing of full wall assemblies for fire propagation. It also included strengthening of accreditation of authorities, testing laboratories and Evidence of Suitability provisions; and increased sprinkler protection of vulnerable balconies as a fire source. It was recognized that internal sprinkler systems at Lacrosse Tower avoided loss of life. Deemed to Satisfy (DtS) solutions including pre-finished metal sheeting were retained. This has led to the recent uptake of solid aluminium cladding as the preferred material for replacement of ACP cladding with PE content and for cladding of new buildings. Adoption of DtS 3mm or 4mm solid aluminium, has been providing certainty of approval, insurance and building value sought by owners in the current climate. This however is not the end of the story!

Many in the industry were hopeful that the introduction of AS5113 wall system testing would produce the knowledge about and certainty of performance that has been lacking since the introduction of ACP cladding, particularly if currently Deemed to Satisfy solutions were subject to the same regime. This is because AS 5113 allows testing of the external wall system not just the cladding. It provided a pathway to demonstrate that Clause C1.9 (a) (i) was satisfied; the requirement that External Walls including their components were noncombustible. *A case in point is corrugated aluminium core panel which is currently DtS as a cladding material. This product has been shown to propagate flame when tested against AS 5113, unless strict installation details are followed such as cavity barriers and fire sealing of panel joints and panel edges. 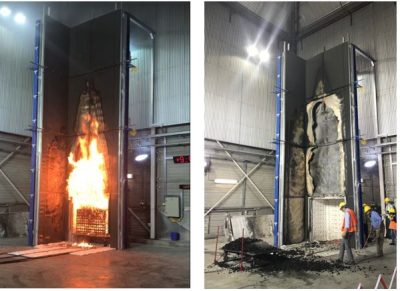 Fire performance is intended to protect the lives of not only building occupants but fire fighters and those escaping. These risks are more accurately assessed by AS5113 testing of all cladding systems to determine the failure mode. For instance, depending on the installation detail solid aluminium sheets are known to fall off the building in full sheets, whereas composite panels fall as smaller debris and this difference should be understood and managed.

NCC 2019 has now been released and while it retains the verification path CV3, utilizing AS5113 testing it is not mandatory for DtS solutions or bonded laminates (which includes ACP) which pass AS1530.1 non-combustibility requirement. Use of the NCC 2016 CV3/AS5113 verification path is not encouraged by the assessment criteria adopted, which includes debris criteria which are not well understood  and appear to be difficult to pass. The equivalent test in the UK on which AS5113 is based assesses the debris criteria differently such that ACP panels with less than 7% PE pass. These panels are certified as Euro Class A2 (limited combustibility). Western Australia is the only State that has looked to provide a rational interpretation of the AS5113 testing. This is done by enabling the test performance to inform the fire engineering design for safe evacuation and fire brigade access (eg a suitable roof over fire exits), with certification of this assessment by the building surveyor.

Different approaches have been adopted by Australian States with NSW and Victoria placing a specific ban on ACP products with greater than 30% PE.

In Queensland,  an amendment to the Building Regulation in October 2018 introduced a strong audit and assessment regime. Here the onus is on building owners to identify ACP content and fire risk, and in conjunction with an RPEQ Fire Engineer, to implement strategies for rectification. All States have moved to effectively mandate removal of 100% PE products in buildings with Type A and B construction. 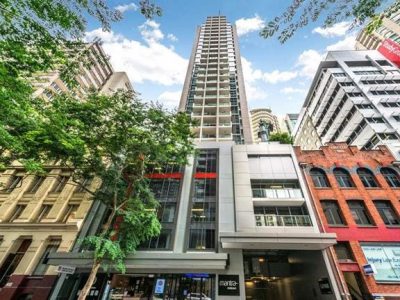 There are very many buildings which are clad in ACP with fire retardant core with less than 30% PE that are now registered as having potential risk. The future action options of, no replacement, partial replacement or full replacement will be driven by risk assessment by fire engineers and response by Insurers and building owners and tenants. It seems likely that the approach taken on government owned buildings will strongly influence the market led reaction.  Queensland has recently (July 2019) come into line with NSW and Victoria in placing a specific ban on products with greater than 30% PE and this has improved confidence  in existing cladding with less than 30% PE.

With the current flight to DtS solid aluminium it is important to consider some of the factors that originally led to the development of ACP.

This is to ensure good performance of replacement or new cladding on projects as discussed earlier – including appearance aspects of flatness, colour consistency, durability and the impact on building heat of high thermal conductivity. A requirement for high performing durable finishes is driving development and adoption of 3mm solid panels which can be coil coated in a similar manner to the 0.5mm ACP skins. Current experience with 3mm coil coating is indicating greater uniformity with solid colours rather than metallic finishes.

3mm solid aluminium (Grade 3003) was shown to perform at least as well as 4mm mineral core Alpolic fr ACP, although not as well as the exceptional performance of 4mm grade 5005 Aluminium or 6mm Alpolic, all products being deemed acceptable. An outlier was the very poor performance of a 4mm ACP product with corrugated aluminium core. The corrugated aluminium core does not provide enough impact resistance for the 0.5mm outer skin, which is readily indented. While impact resistance is not mandated in the BCA it should be considered as relevant to ‘fitness for purpose’.

There is a current state of uncertainty as the industry looks to balance, critical fire safety aspects, NCC testing requirements and aesthetic and thermal performance.

This can be demonstrated by indecision on what products to use as a replacement for the 100% PE panels, that were removed from Brisbane’s P.A Hospital. A similar situation exists at Hunter Stadium in Newcastle. To address this uncertainty new products are in development, including the composite Alpolic NC which has a 0% PE core. This has passed AS1530.1 testing for non-combustibility and will likely be included in the assessment of safe, durable wall systems.

Bligh Tanner has a strong interest in this field of construction, as structural façade engineers over many years involved in assessing and testing products using Performance Solutions, which safely achieve the Performance Requirements of the BCA.

Clearly, the widespread use of ACP with 100% PE represents a significant failure of the assessment and certification processes in operation at the time. With the NCC looking to enable innovation through  Performance Solutions, we recognize the importance and responsibility of engineers to provide effective Evidence of Suitability, in support of this aim. We value the NCC 2019 intent to tighten up the assessment and certification pathways for new products.